The FRENCH RIVIERA, glamour on the seaside

The French Riviera extends along the Mediterranean coast from Cassis, Toulon, or St-Tropez in the west, to Menton, on the border with Italy, in the east. In French, the region is known as the Côte d’Azur, or azure coast, and one glance at the sparkling hue of the Mediterranean will tell you why.

French Riviera holidays have a long history: the region is said to be one of the world’s first modern resort areas. The region contains several glamorous cities and plenty of rustic hilltop villages, as well as 14 regional natural parks.

What to see and do in the French Riviera

The glamorous city of Cannes is most famous for the international film festival which is held there in May. If you visit at festival time, the city will be awash with scrubbed-up celebrities posing in tuxedos and gowns on the red carpet. But the city is a well-known celebrity playground, and star-spotting is one of the most fun things to do in Cannes year-round.

In Le Suquet, the city’s old town, you’ll find a medieval castle built by monks in the 12th century, now known as Musée de la Castre, an art museum. Just below the castle is the 17th-century Église Notre-Dame de l’Ésperance, and the adjacent medieval ramparts. It’s a bit of a hike up to the old town – including 109 steps – but you’ll be well rewarded with spectacular 360˚ views of the city and the harbor.

Some 30km (18 miles) along the coast from Cannes is Nice, a unique hybrid of a city which only became part of France in 1860, and has kept one foot firmly in Italy. Here, you’ll find fresh pasta shops on every corner, Italian-style buildings, and a local dialect which owes as much to Italian as to French.

Nice has been a major tourist attraction since the 1700s, when rich Europeans came for a breath of sea air. And really, the reasons for holidaying in Nice in the 18th century aren’t so different from the things that bring visitors today: fine food, year-round sunshine, and an array of fantastic restaurants, cafes, and bars.

A ten-minute light hike (or take the elevator from Promenade des Anglais) will take you up from the old town to the Colline du Château (Castle Hill) where you’ll find the ruins of the former citadel and cathedral. More importantly, you’ll also be treated to spectacular views of the port, the Baie des Anges (Angels’ Bay) and the old town.

Another town to add to your French Riviera checklist is Antibes, whose 16th-century ramparts, boat-filled port, and attractive old town of cobblestoned streets adorned with flowers make it a charming place to visit. If you’re an art afficionado, you may recognize several scenes here, as Picasso painted it a lot – there’s even a museum dedicated to him. And if it’s sunbathing you’re seeking, you’re in the right place: like most of those on the Côte d’Azur, Antibes’ beaches are stunning. Beyond the city, you’ll find the Cap d’Antibes, a wooded cape with plenty of walking trails and seaside mansions.

There’s another must-see destination on the French Riviera which isn’t actually part of France at all: Monaco. Bordered by France to the north, east and west, and by the Mediterranean Sea to the south, Monaco is the world’s second-smallest sovereign state – only the Vatican City is smaller. It’s been a prime party-spot for the jet set since the early 20th century.

Monaco city’s old town, Monaco Ville (also known as Le Rocher) is the only part of Monaco to have retained its old-world charm. Perched on a jutting rock (“Le Rocher” means “The Rock”), it’s home to small, winding medieval lanes, colorful houses, and monuments. While the rest of Monaco is less picturesque than the old town, there’s still fun to be had spotting millionaires’ yachts, and admiring the unlikely looking building of the Monte Carlo Casino, built in 1863.

For a slice of history, don’t miss the majestic Prince’s Palace, the official residence of the Sovereign Prince of Monaco. And for travelers with kids, the oceanographic museum, with its aquariums and kid-friendly museum, is a fun day out.

Jutting out into the Mediterranean between Nice and Monaco is the Cap-Ferrat peninsula, a headland dotted with the homes and second homes of millionaires, and home to the prosperous village of St-Jean-Cap-Ferrat. While the peninsula’s 14km (9 miles) of walking paths make it a pleasant place for a stroll, the highlight is doubtless the rose-colored Villa Ephrussi, an over-the-top, belle-époque villa which was built in the nineteenth century by the Baroness Béatrice de Rothschild, of the Rothschild banking family. Thanks to the Baroness’s penchant for art collecting, the villa is a cornucopia of Sèvres porcelain, Fragonard paintings, and Louis XVI furniture. It’s also surrounded by nine gardens, each with a distinct theme, including Spanish, Japanese, French, cactus and stone.

As well as fashionable cities, the French Riviera is also home to more rustic villages. A wonderful example is Èze, a rocky village perched precariously on a windy hillside. The medieval village, with its ramshackle stone houses, winding lanes, and impressive panoramic views, can unfortunately get extremely busy – so get there early if you want it to yourself.

The best time to go to the French Riviera

Thanks to protection from the hills in the west and the alps in the northwest, the French Riviera enjoys almost 300 days of sunshine every year. The high season is in July and August, when the glitterati descend for a few weeks of partying and soaking up the Mediterranean climate.

June and September are far less crowded, and a good option if you want a quieter stay.

However, the region’s best-kept secret, according to locals, is the winter. Temperatures rarely reach freezing, and the cities and several of the smaller towns host traditional Christmas markets.

Travel to the French Riviera with Paris-Toujours

We have plenty of activities, tours and trips to offer on the French Riviera, from private day tours to hilltop villages like Gourdon, St Paul de Vence and Tourrettes, to a private hiking trip on the red rocks of the Esterel mountain.

We can also organize private tours to Monaco for a day of yacht-spotting and exploring the old town, to the hilltop village of Èze, or to the rose-colored Villa Ephrussi.

For something a little different, we can organize a private perfume-making workshop in Grasse, a small town which is home some of the world’s most famous perfume houses.

Or, for a truly luxurious afternoon, why not take to the seas with a private yacht tour?

Dreaming of soaking up the sun on the Côte d’Azur? Contact us to start planning your trip today!

A private trip to the Îles du Lérins, two small islands just off the coast of Cannes. Saint-Marguerite, the larger of the two, is covered with pine trees and green oaks, and snaked with paths, perfect for a hike or casual stroll. Since large boats are not allowed to approach the island’s coast, it’s a peaceful place which is perfect for getting away from the bustle of the city. The smaller island is Saint Honorat, and it’s home to the 5th-century Abbaye de Lérins, where monks still grow wine and lead exclusive, appointment-only wine-tastings. 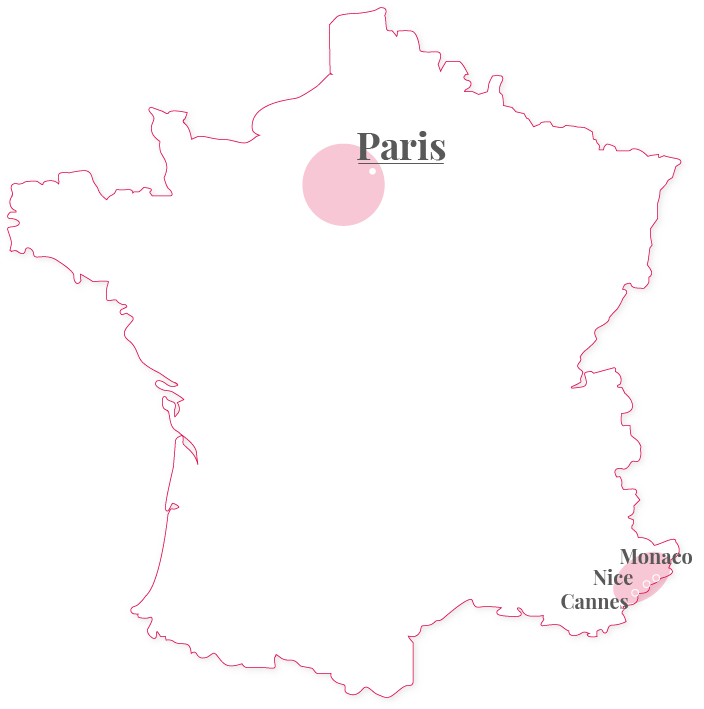