NORMANDY, a taste of History

The Normandy region in north-western France is famous for its charming countryside, quaint seaside towns and villages, and world-class cuisine. But the region is also a land of History with the Normandy D Day sites commemorating the June 1944 landing.

A land of dairy farms and apple orchards, you’ll find plenty of apple-based drinks like cider, calvados (apple brandy) and pommeau (a mixture of apple brandy and apple juice). Normandy is also famous for its cheeses, with camembert, pont-l’évêque, and Neufchatel among the region’s most famous exports.

And of course, due to its location, there are few more typical things to do in Normandy than stuffing yourself with delicious seafood. Food and drink aside, Normandy is the perfect place to take it slow, and explore the countryside at your own pace.

What to see and do in Normandy

For foodies, one of the most exciting things to do in Normandy – and one of the best ways to experience the region like a local – is to visit the Saturday morning market in the coastal town of Dieppe. Voted in 2020 as the finest market in France, the Marché de Dieppe is made up of over a mile of stalls manned by friendly locals, and selling everything from local seafood and apple drinks to delicious local cheeses, to clothes and textiles. If you’re lucky you may even get a sample or two as you stroll.

For those more interested in cultural exploration than grocery shopping, Normandy won’t disappoint either. The region is the birthplace of famous French author Gustave Flaubert, who lived there most of his life. Literature enthusiasts shouldn’t miss the small village of Ry, just east of Rouen, which was the inspiration for the setting of Flaubert’s most famous work, Madame Bovary.

Normandy is also the birthplace of Impressionism. Claude Monet’s house at Giverny is one of the most popular day trips from Paris to Normandy, and is worth a visit, particularly in the summer when the garden is in full bloom and you’ll be able to see the famous waterlilies in all their glory.

Other unmissable things to do in Normandy include a visit to the iconic Mont Saint Michel, a medieval island village just off the coast, at the mouth of the Couesnon River, whose highlight is the 11th-century Mont-Saint-Michel Abbey. Mont Saint-Michel and its bay have been on the UNESCO World Heritage list since 1979. The island is accessible via a free shuttle across the causeway, but be sure to check the tides before you go! Many a visitor has found themselves stuck on the island waiting for the tide to go out again after mistiming their return trip. The abbey itself has been classed as a historic monument since 1874 and is best viewed at sunset. In the summer, it’s lit by magnificent light shows once the sun goes down.

As for seaside towns, the medieval, colorful harbor town of Honfleur is worth exploring, as is Deauville, with its 1920s boardwalk and art deco changing cabins lining the beach. Each cabin is named for a famous film star, so be sure to look for your favorites. And if you visit in September, when the town’s American film festival is in action, you may just spot a real star or two!

For more rugged coastal beauty, don’t miss the majestic alabaster cliffs at Etretat, whose natural arches and rock formations will make for a fabulous backdrop for your next Instagram photo. For history fans, don’t miss the 12th Century Château Gaillard in Les Andelys, a medieval beauty overlooking the River Seine.

Normandy is also home to Bayeux, a medieval town complete with cobblestone streets, half-timbered houses, and the towering Norman-Gothic cathedral, Cathedrale Notre Dame. And if the name of the town sounds familiar to you, you’re probably thinking of the Bayeux Tapestry, a 70m-long wall hanging embroidered in the 11th century and depicting the Norman conquest of England in 1066.

And of course, many people come to Normandy to learn about more recent history, by touring the famous Normandy D-Day beaches in this part of the country. On June 6, 1944 more than 150,000 allied soldiers landed by sea and air on a number of beaches along the Normandy coast. Now known as “D-Day”, this represented the largest military operation in history. It was also a decisive moment in the history of Western Europe – and the world – as it marked the beginning of the Battle of Normandy, which would eventually lead to the end of the Second World War.

Today, many of the most important D-Day sites can be visited by the public, and side trips from Paris to Normandy to see them are popular among our guests at Paris-Toujours. Some of the main sites include Omaha Beach and Utah Beach, code names for two of the five sections of the Normandy coast where the allies landed in 1944. To delve even deeper into the history, consider a visit to The Airborne Museum in nearby Sainte-Mère Eglise, which takes visitors back in time to discover the events of D-Day through the eyes of US paratroopers.

And just thirty miles along the coast at Colleville-sur-Mer is a perhaps even more poignant site: the American Cemetery. The first American cemetery in Europe in World War II, the cemetery was established just two days after the D-Day landings, and contains the graves of some nine thousand American soldiers.

The best time to go to Normandy

Like much of France, Normandy can be appreciated all year round. In the spring, you’ll be able to enjoy the sights (and sunshine) before the crowds descend, while summer is filled with outdoor events and light shows (and of course, a bit of relaxation – even in northern France, beaches are warm in the summer!). The festive season, naturally, sees the region alive with twinkling lights and cozy eateries – but we think the autumn is worth considering too, if only for the numerous food festivals that take place in the region (did someone say cheese and cider?). If you wish to avoid the crowds though, do not try to visit the Normandy D Day sites during the commemorating week early June.

Travel to Normandy with Paris-Toujours

We’ve organized several-day breaks and side trips from Paris to Normandy, tours, and other activities in the region. Activities we’re able to offer include a guided tour of the Pays d’Auge countryside, and private Normandy D day tours, for those who want to get a little closer to history and see those beaches for themselves. For a more relaxing vacation, we can also offer cider and calvados tastings, and even treatments in a thalasso by the sea.

Ready to start planning your trip to Normandy? Contact us to learn how we can help!

A trip to a quintessential Norman village in the heart of cider and cheese country. You’ll spend the day exploring quaint streets filled with half-timbered houses, shops, and cafes, surrounded by apple orchards, and finish the day with dinner in a Michelin-starred restaurant. 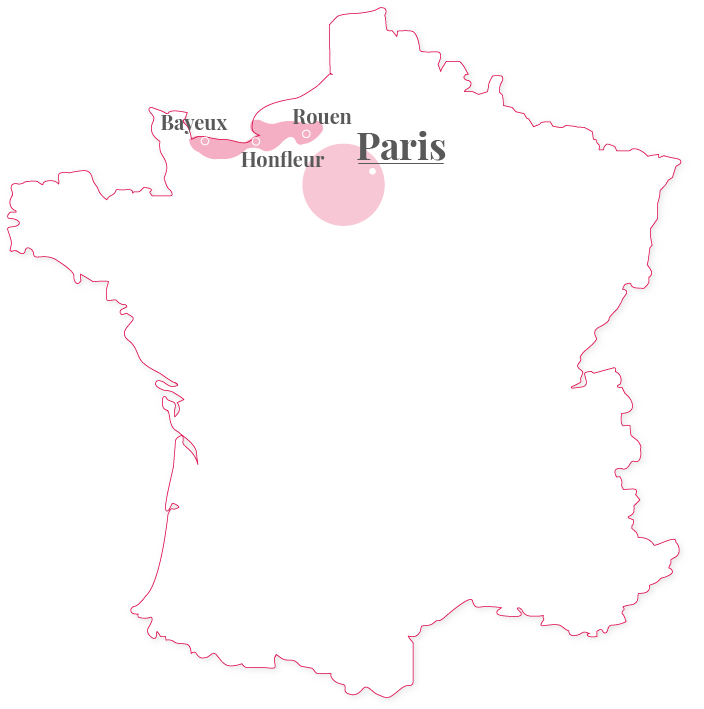