Bordering Switzerland to the south and Germany to the east, the French region of Alsace has always had its own unique, idiosyncratic character. The region has changed hands between France and Germany several times over the centuries, and has developed its own cuisine, history, architecture, and language, all of which are a little French, a little German, and 100% Alsatian. Alsace is characterized by gently rolling countryside covered with vines, dramatic pine forests hiding picturesque villages, towns and cities, and traditions stretching back through time. And the Alsace Christmas markets are of course famous for their fairytale atmosphere.

What to see and do in Alsace

Alsace’s main town is Strasbourg, a young, trendy city that is nonetheless firmly tied to its history. The main event is the city’s cathedral, Cathédrale Notre Dame de Strasbourg, a red sandstone gothic marvel, which was the world’s tallest building from 1647 until 1874. The first stone of the cathedral was laid in 1015, meaning it’s been standing strong for over 1000 years.

One of the most popular areas of town for tourists is called La Petite France – Little France – and is a maze of interlocking waterways and toy-town brightly painted half-timbered houses. In the high season, you may have to fight your way through the crowds, but it’ll be worth it for that perfect Instagram shot of one of the most typical Alsace Christmas markets.

More offbeat things to do in Strasbourg include exploring the Musée Alsacien, to learn about the historic region of Alsace, and paying a visit to the Cave Historique des Hospices de Strasbourg. This ancient wine cellar underneath the city hospital contains the world’s oldest barrel of wine, which has miraculously not been touched since it was made in 1447!

Outside of Strasbourg, the second city of the Alsace region is Mulhouse (pronounced Mul-ooze). While this city sadly hasn’t retained much of its typical Alsatian charm (it was largely rebuilt after the Second World War), it is worth a visit for its two transport-themed museums. The Cité de l’Automobile is France’s national automobile museum, with the largest collection of displayed vehicles (and largest collection of Bugattis!) in the world. There’s also the Cité du Train, Europe’s largest railway museum.

Between Mulhouse and Strasbourg is Colmar, a charming fairy-tale city whose ancient center is so crisscrossed by romantic canals and lanes that it’s often called La Petite Venise – Little Venice. Colmar, the capital of the Alsace wine region, is an architectural treasure trove, where you’ll find examples of the gothic, renaissance, and baroque. Foodies, take note: there’s also a lovely covered food market.

And as for wine? The Alsace wine route is the oldest such route in France, and stretches 150 miles, with over 1000 individual vignerons (winemakers). It’s tradition in Alsace to offer a kind welcome to visitors, and many of these winemakers will happily invite you into their cellars for free wine-tastings.

The Alsace villages along the wine route have a true fairy-tale charm: the medieval ramparts, brightly-painted cottages, and church spires with storks’ nests perching improbably on top will have you expecting to see Hansel and Gretel coming round the next corner. Some of the most charming villages and towns include Riquewihr, with its pedestrianized center, medieval ramparts, and maze of twisted lanes, and Kaysersberg, with its hilltop castle, 18th-century fortified bridge, and backdrop of sloping vines. But probably the most beautiful village is Eguisheim, which was in fact voted as “France’s favorite village” in 2013. The picturesque town unfolds in concentric circles of brightly painted timber-framed houses from the 8th-century castle around which it was built.

There are also plenty of things to do in Alsace for outdoor types, thanks to the Vosges National Park, with its mountains, lakes, waterfalls, and forests. The Vosges Mountains frequently feature in stages of the Tour de France, and are a paradise for walking, biking, hang-gliding and canyoning – and in the winter, skiing.

Hungry after a day exploring the Alsatian countryside? This is the land of the ferme-auberge, working farms with rustic restaurants, serving up hearty portions of traditional Alsatian delicacies, made from local ingredients. Yum!

The whole region of Alsace is steeped in history, but if you really want to be transported to the past, a visit to the Eco-Musée in Ungersheim, one of the more off-the-beaten-track things to do in Alsace, is in order. It’s a collection of over 80 buildings designed to give you a true impression of life in Alsace at the turn of the century, and includes demonstrations of traditional crafts, guided walking tours, and workshops for both kids and adults.

The best time to go to Alsace

Alsace is busiest in July and August, so while it’s a lovely place to visit in summer (especially if outdoor activities are on the cards), you might have to fight to get that quaint Petite France photo without anyone else in it!

Instead, we recommend planning your trip to Alsace for later in the year. In the autumn, from September to October, many of the villages along the wine route organize half-day trips so that tourists can get involved with the wine harvest.

And of course, this region, with its chocolate-box charm, really comes into its own at Christmas time, when Alsace Christmas markets – some of the most famous in the world – bring the fairytale villages, towns and cities of Alsace to life.

If you do choose to visit Alsace at Christmas, just bear in mind that the prettiness comes at a price: everyone else is there too! Christmas is the region’s peak season, so be prepared for crowds.

Travel to Alsace with Paris-Toujours

Need some help planning your trip? We’ve organized plenty of exciting, interesting, and exclusive things to do in Alsace, including private wine tours, and private tours of those quaint Alsace villages.

If you’re visiting the region at Christmas time, we can also arrange private Alsace Christmas market tours, so that you can experience them like a local.

Like the sound of a wintry vacation to the cozy restaurants, quirky, quaint streets, and Christmas markets of Alsace? Contact us today to start planning your trip!

A trip to Munster, a town surrounded by gently rolling green hills, and built around the Abbé Saint-Grégoire. You’ll discover the history of this small town, founded by Irish monks bringing Christianity to this once-wild spot in the 7th century. And of course, you’ll get to taste the town’s namesake cheese – it tastes better than it smells, we promise! 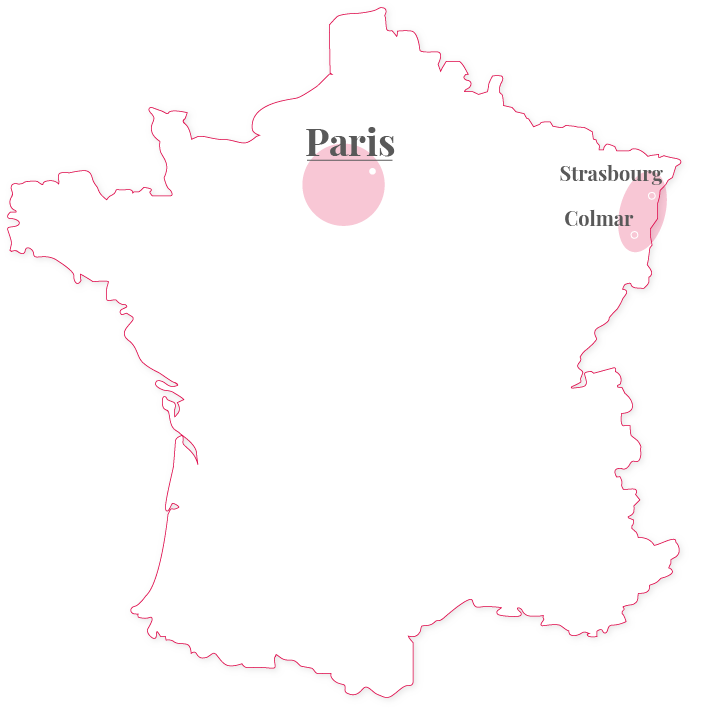